Dirty Jim, AKA Heime Cheba AKA James Schenk passed away in June 2022. 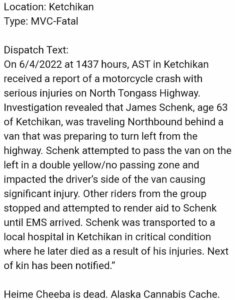 I never had the good fortune of meeting Jim, but he was a “friend of a friend” and I have had the very good fortune to sample some of the outstanding strains that made the man a legend in his own time in the cannabis community.

Today I had some “Dirty Jim” laid on me with the request that I do a review in honor of Heime Cheeba. So dig out a bit of your favorite strain, get your head right, and let’s take one last ride with Dirty Jim.

Leafly has this to say about Mud Bite(!)

“There is a very little known about Mud Bite. This strain supposedly originated in Ketchikan, Alaska among an enclave of float houses. When the tide receded and the float houses sank, they came to rest on the cold, muddy seafloor, which was referred to as the Mud Bight. This 75% indica-dominant strain is possibility a long lost descendant of Afghani genetics transplanted in Alaska sometime in the early to mid 70’s.”

As for Bruce Banner.. if you do not know where the fuck have you been? You can score some Bruce banner Hash at Country Cannabis or check with your favorite retailer. It’s one of the Rock Star strains.
“This green monster of a strain is potent, averaging a 21% THC level. If you’re new to smoking Bruce Banner, expect the effects to be strong and to come on quickly before dissipating into a euphoric and creative buzz. The effects of this strain will linger in the head and may provide body relaxation. Bruce Banner is a bud best enjoyed during the daytime.” Leafly 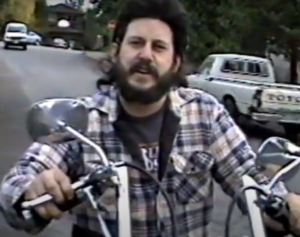 If you would like to get to know Dirty Jim you can check out his YouTube, I recommend the video of him working on Sonny Barger’s Chopper, which Dirty Jim acquired.

James Schenk AKA Heime Cheeba has been growing and breeding as well as preserving Cannabis strains for 40 plus years, most all strains are from 70s,80s,and 90s time period and many old legends from former and current seed Banks, so many strains hunted across the world, hard to list all. MTF 1974, and Mud Bight Delight are still 2 of the most requested strains from the past. Most all the new strains have been bred by using genetics from the past and working them to stabilization of at least F4 Cultivars before releasing.

“Howdy from the final frontier my friends! Today we are grateful to be joined by the old school genetic guru, the biker and breeder combo all in one, Heime Cheeba of Alaskan Cannabis Cache! Taking a break off his bike to sit down and give us some killer info into his genetics and what to expect going forward

Delving into all things road kill skunk, mud butt delight, old strains that don’t even have names, growing , genetic preservation and lineages..the list goes on and on. Please be sure to grab some of Heime’s seeds as these things are super special!”
~The Potcast 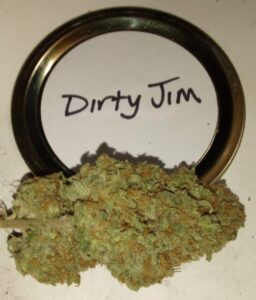 The cultivation was by Dank Research, one of the finest gourmet small scale cultivators that specializes in top shelf strains. It was grown in Living Soil and he says the shit took forever to grow.

Opening the jar I smell the skunk…not to the extreme but certainly the dominant aroma.

Touching the flame to the bud the skunk gives me fair warning to treat it with respect and I back off on the hit…nice expansion, excellent flavor, peppery on the exhale and lingering on the tongue. second hit I get a little braver and I’m already feeling the head rush. This is a lifting hybrid, I can tell it is going to be a long night already.

Being gifted a large bud I’m already thinking I need to ask about the availability, as three hits in this just moved to the top of my strain bank, which has 5 or 6 of the best to be found in the MatSu at the moment.

This Dirty Jim touches all the bases for what I look for, delightful skunky nose, flavor loaded and rich inhale, lingering and peppery exhale, rapid onset mind high that is already making this review take on a more creative aspect.

Gotta pay the proper respects to the creator and his dedication to keeping the legends alive.

And while, as a reviewer, I am often faced with the dilemma of giving a bad review to a strain (“OK, See if I ever give you another bud, MF!”) in this case I’m more faced with trying to give a proper review without having a verbal orgasm. 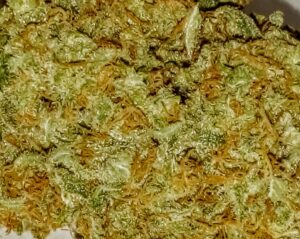 Dirty Jim, turns out we knew some of the same people, and we might well have passed a joint around a camp fire back in the day. I was 3 stages removed from MTF, you apprenticed under the creator. During the time I lived with some Bikers in Eagle River in the mid 1970s I’m sure I passed a joint with him, and I think I can even remember the time we made a throne out of kilos up in the Valley…I had the pictures for a few years.

Big Jim, you lived life large, paid due respect to the plant and to the brothers you rode with and you have left us a respectable legacy in this strain named for you.

Well done, Brother, may your legend ride on forever.