So Ron Bass didn’t drop the real MTF last year, but the article might have generated enough interest that it crawled it’s way out of the Bush to once again re enter the cornucopia of cannabis strains we all know and love. 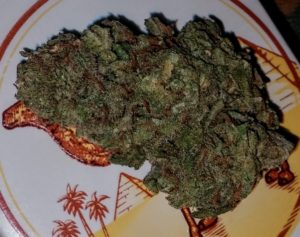 As I’m writing this I’m smoking a bit of the latest incarnation of Matanuska Thunderfuck, an once again it comes from Ron Bass, who dropped it at The Green Spot in Big Lake back around the beginning of February. It has a nice Earthy base and I can taste a little bit of spice. It also has a nice aroma but not quite as skunky pungent as I would expect, but I also suspect that it might come with dialing in the cultivation. I think he needs to bury some dog salmon in his soil to give it that true MTF flavor.

Here is Ron’s video drop of MTF, hat tip to the production crew on this one. 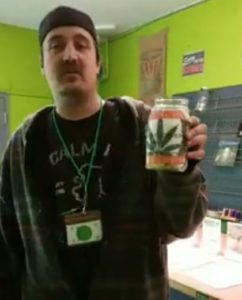 So I can tell you that these are excellent buds, tight and sticky, good flavor profile and most importantly a quite excellent high.
It has taken me several days to get around to this write up because every time I’d smoke some I’d wander off in 5 different directions doing 10 different things. Is it the real MTF? I can’t say it is, but I want to believe, and like Santa, Jesus and the quest for the perfect stone isn’t believing what it’s all about?

Be the change you want to see in the World.

I want to see my logo on a jar of Matanuska Thunderfuck for sale in a Weed Shop…Oh, wait, I have, so perhaps that visualization, holistic universe stuff has some basis in reality after all.

Matanuska Thunderfuck, “Thunderfuck”, “MTF”…there are a few legendary strains and this is one of the most legendary and might be lost forever or might be in some old hippies cellar in the Butte just waiting for the day. Hell, Elvis is alive and living in Barstow, anythings possible.
Even here in Alaska where I sit this early Spring day in April, 2017 it is hard to pin down the legend. Most recently Laurel Andrews wrote

The guy on the front left is my ex Brother in Law Mark, we used to live in my VW Microbus/Ivory Carving studio back in the early 80’s around Wasilla. He took off to create a magazine and I took off to see the World with the US Army. Some time later I stayed with Mark and my sister Helen when they lived in Palmer.

But Mark didn’t know me when I was selling keys of Mexican Dirt Weed and the occasional Columbian Gold, Jamaican, Hawaiian or MTF in Anchorage in ’76, or when I was selling 3 finger lids of dirt weed and had never heard of MTF in Eagle River in ’72. I did score some “Sinsemilla” or Hashish and rarely some Thai Weed now and then back in those early days.
And I don’t think Ron Bass was even born then, but if anyone can bring back the strain I’m hoping he does.

Yea, I smoked some Matanuska Thunderfuck. Of that I’m 90% certain, I knew a few of the right people even though I was just a snot nosed brat. And I’m pretty sure I saw a Quonset hut in Big Lake with a dozen or so huge MTF plants in it but I was really, really stoned and other than the size, it being the largest grow I’d ever seen at the time, I was not really in awe because there were only a few “strains” around back then, the local MTF, Northern Lights, Columbian, Jamaican and Mexican Dirt Weed. And a few guys were growing it in their yards and green houses, and most of that, if it actually produced buds, ended up being called “MTF” by the time it reached the “Street”.

The last time I smoked what I think might have been the real deal was in 1976 in Eagle River just before I went in the Army and went to West Germany for a 3 year Hashish Vacation. It smelled like Pine Frog Farts and rolled up the back of your head a few minutes after you decided it was not going to hit you at all and were starting to think you got burned. I seem to remeber it as a scraggly bud, but at the time the only “tight” buds I’d seen were some Cali Skunk and Columbian Gold. As I was living with the President of a MC and his Lt and a few others I assume they got it from one of their brothers in the Valley but didn’t ask and wasn’t told, I didn’t go on runs with them.

Others have contributed their own stories of the Wonder Weed and where it might have sprung from…I offer them for your consideration.

I only know what I saw and this is what I saw. I started smoking and selling in 1965 and came to Alaska in 1973. I had whatever I could sent up here to sell. There were only 4 types available on the streets here then. Mexican, Colombian, Jamaican and Thai sticks or bagged. There was no indoor growing then and any outdoor growing was done by pulling tarp over small greenhouse grows to get 12/12. These were all from the seeds of the 4 strains I listed. Then thousands and thousands of young guys started flooding into the state to build the pipeline in the mid 70s. Money everywhere. This is when the first guys from Hawaii showed up with the sweet piney smelling sensimilla. There is no doubt in my mind that this is where the seed stock for MTF came from. By the early 80s it was being grown out door by pulling tarp in the Tanana and Mat-Su valleys. The biggest grows were in the Tanana valley as the Matanuska valley was a low populated backwater area then and the Tanana valley had more people and got a lot more intensive sun and temperatures. Somebody coined the name in the early 80s and the name was used to sell any and everything but if you knew the strain you weren’t fooled. The largest MTF grow was taken down in the early 80s in the Tanana valley, Thousands of plants in greenhouses disguised as a tomato operation. Anyhow a disabled nam vet in the Mat-su valley got the strain in the mid 80s when indoor growing started to catch on. He kept it growing by clone till 2008 when he died and my friend got all his strains and equipment. I got a clone from him and did 3 runs with it. Same strain I remember from waaaaay back. Nice buzz but still got them damn airy buds, no matter how you grow it. I culled it. I’m on a low plant count and I’m not keeping plants for nostalgia reasons I thought my buddy would always have clones if I wanted it back but it turns out he finally wanted to upgrade all his strains, bye, bye. MTF. oh well, I still got some jars buried and when the ground thaws I’ll post up some pics of the cured nugs. I’m sure there are a thousand stories on MTF and this is just mine.

akgreenvalley over on marijuana.com’s forum has about the best description of the effects as I remember them.
“it always had that creeping feeling like something bigs coming, then bangs you with a heavy cerebral high that sent tingles through your brain, neck and shoulders, and later drops hard right down to your toes for some heavy couch lock. it’s the signature high you could say, the proof in the pudding.”

“high times magazine gave Alaska a cover and feature story. they found the cook inlet man responsible and in the interview he called the “thunder weed” by its full name, “matanuska valley thunder fuck” … the magazine cut it down to “matanuska thunder fuck” when they published their feature. everyone followed suit and started calling it exactly that.
the magazine had a huge fan base even in the 70’s, a lot of people saw the feature and decided to head to alaska to check it out.” Check out his whole story here.

Mat-M.T.F. Genetics from Palmer has a pretty convincing argument…it is in alignment with what I heard back in the early ’70s

“If you research the history of Palmer, you will find that it was/is a government agriculture experimental station. The original families who moved here for this experiment had children in Palmer around the 40’s & 50’s that were influenced by the hippie movement and the influx of their kind to the Matanuska-Susitna Valley around the beginning of the 70’s. With the knowledge those children gained, while working with their parents on their family farms growing up, and from the projects they were involved in at the experimental station as college students, and from a few new found hippy friends from the west coast of the US, they began flower-forcing by blacking out greenhouses during the summer. None made clones. They did remove males, and they knew how to prepare the cannabis for market. So with that, people in Alaska started to see some green bud as opposed to imported bud, and it was all coming out of the valley.”

So, I leave it to you to make up your own mind, I think that there was a strain called MTF grown in the Valley, and the name/potency led to any good weed from the Valley being called that because when the Pipeliners came to town with Carharts full of cash that was what they asked for. “Sure, I have some MTF!”…you sell what sells, let the buyer beware. As for anyone having the actual strain today, I doubt it, I believe it was dutifully pulled and burned by Officers trying to protect us from ourselves.