There has been a lot said about RSO, not a lot of clinical research but that is changing. I’m still seeing questions every week about what RSO is and what it does and how to make it. I had my own questions so I set out to find the answers. One of the first things I did was find out how it is made, basically soak weed in a solvent and then evaporate the solvent and what you have left are the oils that were suspended in the solvent. It gets a lot more complicated but more on that later. 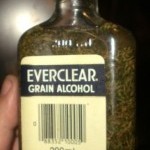 I came into a 180 proof Everclear and filled the bottle with top shelf buds after making a little room in the bottle by sweetening my coffee a few times. After a week of shaking the bottle daily I opened it and poked around with a stick creating general havoc and then set it aside again, shaking it every time I happened to think about it.

After around a Month I had a delightfully tinted alcohol which I put through a silk screen and then set out in a large glass pie plate with a silk screen cover to keep dust out.  After some passage of time the alcohol was gone and all that was left was a thick, black tar like substance. RSO!

With no ability to actually test it I have no idea of the potency. From what I have read a dose would be around 1/10th of a gram or one small drop orally, I suppose it could be used as a salve or lotion should one desire.

Ricky Logan Simpson (born November 30, 1949), also known as Rick Simpson, has become famous for teaching people that cannabis oil can cure cancer and many other health problems. Some people believe that his claims are unsubstantiated because he bases his statements on personal experience and testimonials. There is not enough scientific evidence at this time to support the claim that cannabis oil can cure all cancers.

He is a retired power engineer who worked for 25 years in the medical system in Canada. After suffering a severe head injury in 1997 that caused him to have chronic pain, high blood pressure and insomnia. He took all the medications that the doctors prescribed, but they did little for him and their side effects did nothing but harm. The medications essentially turned him into a chemical zombie. So in desperation he turned to the use of cannabis extracts, which he produced himself and quickly found that it helped him to such an extent that he started to believe that cannabis may be the greatest natural medicine on earth.

Cannabis oil controlled his pain, his blood pressure and allowed him to sleep. Later on he was diagnosed with skin cancer and his doctor failed to heal it with surgery so he decided to use cannabis oil on it because of a news report that he heard in 1974 about how THC had shrunk cancer tumors. He affirmed that he applied cannabis oil on some bandages and placed the bandages over the areas that had skin cancer and that four days later the cancer was healed. Rick said that he began making the oil and using it to treat and cure dozens of people of different health problems. Eventually thousands of people came to him for cannabis oil treatments and he successfully treated over 5,000 people for free. There is no way to verify if he really healed thousands of people.

After learning the truth about the amazing healing abilities of these extracts, he then went to those in authority to have its use recognized. Instead of support, he found that in reality those in positions of power, wanted to keep the truth hidden from public view. Having no where else to turn, he made this knowledge public by making a website in 2004 called phoenixtears to educate the public and by releasing a free documentary in 2008 on youtube called “Run From the Cure” that shared his story.