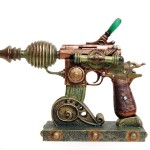 Vaping can be done on dry buds, BHO, CO2 extract or Rosin. I have recently come to prefer Rosin as it gives me a carbolized, adulterant free product and I still have the “chips” that seem to smoke just fine and also can be put in a Vaporizer and fully utilized. Rosin is pure heat pressed oil, or just pressure pressed, but heat pressing at THCa activation temps seems to be the most reasonable route for my needs.

I recently acquired an HerbalAire vaporizer with adjustable temperature ranges.

After several experiments on my own I decided that I liked around 365°F for dried buddage. I decided to see just what the experts had to say and below is the initial gleaning of two sources of information…

There are 483 identifiable chemical constituents known to exist in the cannabis plant, and at least 85 different cannabinoids have been isolated from the plant.The aromatic terpenoids begin to vaporize at 126.0 °C (258.8 °F), but the more bio-active tetrahydrocannabinol (THC), cannabidiol (CBD) and cannabinol (CBN) do not vaporize until near their respective boiling points: THC 149.3 °C (300.7 °F), CBD 206.3 °C (403.3 °F) and CBN 212.7 °C (414.9 °F). and because most commercial vaporizers are slow in extraction and delivery, the vapor inhaled is first aromatic, but only minimally active; as the plant material temperature rises, the vapor becomes increasingly bio-active, but minimally aromatic, because most of the aromatics have already been released.

In a 2001 study, researchers found that “it is possible to vaporize medically active THC by heating marijuana to a temperature short of the point of combustion, thereby eliminating or substantially reducing harmful smoke toxins that are normally present in marijuana smoke.” The unit produced THC at a temperature of 185 °C (365 °F), while eliminating three measured combustion products, benzene, toluene and naphthalene. Carbon monoxide and smoke tars were also reduced, but not quantified.

“The Extreme-Q seems to work well set between 383°-392°F. Because of the way this vape is designed the temp up where the herbs actually get vaped will be slightly lower than the core heater temp. I guesstimate the true vape temp to be roughly 20 degrees lower which brings you down into the ideal vape zone.”